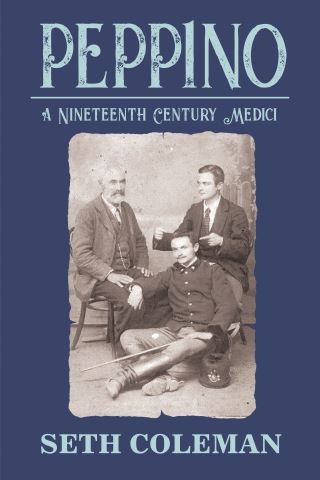 Seth Coleman’s Peppino introduces readers to a young Italian boy who is destined for greatness but first must overcome grave obstacles in order to fulfill his potential. Born in nineteenth-century southern Italy, Peppino is the son of the baroness of Bologna. A member of the famous Medici family, one of the most prominent families in European history, the baroness expects her son to claim his role of baron and accept his rightful place among the aristocracy. However, the precocious Peppino rebels against his upper-class position, setting off on his own to fight for the common people.

Joining Peppino in the struggle are Nicola, a devout Christian peasant, and Abramo, a Hassidic Jew. Together all three risk their lives in order to lead a rebellion against the injustices of the Church and--more specifically--the local monsignor, who has evil ambitions of his own.

Pope Leo XIII is another warrior in the fight for the people’s rights. He had successfully fought off the mafia’s stranglehold on the country and as Pope worked tirelessly against class injustices. With his niece set to marry Peppino, the novel offers a unique glimpse into the personal life of an often-solitary figure, whom millions adore but only a handful really know.

Ultimately a story of good versus evil, religion versus God, and hypocrisy versus righteousness, Peppino examines history through the lens of the personal. Through his novel, Coleman offers readers a human story with breathtaking scope.

Seth Coleman graduated in 1973 with a degree in public relations and journalism from San Jose State University. Throughout his extensive career, Coleman worked in franchise marketing for corporations such as McDonald’s, Sonic, and PIP Printing. He started his own consulting company, Back on Track Marketing, in 1987 in order to work with both independent and franchise business owners. In addition to marketing, Coleman has written, produced, and directed television commercials for several well-known companies and organizations. Retired since 2006, Coleman has dedicated himself to a new career as a writer, beginning with the pulse-pounding thriller Critical Transfer. His most recent novel, Peppino, is now available as well. Coleman currently lives in Arizona.